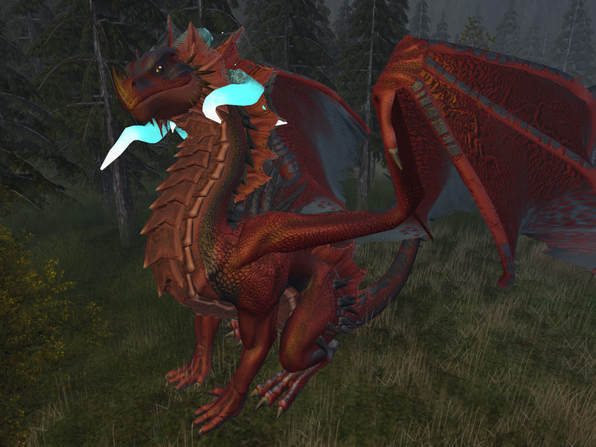 There are some beings which are able to source these magical locations within the world, they seek them out for one reason or another and in a way they seem to thrive in these areas such beasts are things of legends for they have the abilities to focus such magic in certain ways some of which is inward and others can focus it outward... No matter which way these legendary beasts can focus their magical talents it tends to be a drain to them in one way or another.

One of the most notable of legendary beasts are dragons, most consider them a whisper of a memory as they are as rare as the green flash on a setting sun. Yet some speak of the legends, say they've seen the shadows in the middle of the night slipping over the moon or there head peaking up from the middle of a lake...

Dragons have their reasons to remain 'extinct'.. There very bodies were hunted for magic, from their shed scales to their blood those of dragon kind were at one point hunted till they had to disappear to survive. Dragons for their own safety faded into legend to save themselves. Yet as the world developed, new sightings began and new creations that caused damage to the nature seemed to one night malfunction, or be found destroyed the next day..  There were whispers something of magic was destroying such things, but no evidence was found except fire damage normally was the main source of destruction..

Dragons are guardians of nature and observers, they are prideful beings and sometimes arrogant. Yet many dragons are creatures of understanding, they will respect those who show respect to them. Not much is known about dragons, for instance no one truly knows how long dragons live for they have been legends for so long that the stories once written have faded away to dust... The dragons themselves are reclusive for their own safety, so getting information from them is difficult and when they travel they only tend to be found as a individual or as a pair.

Human form: Dragons have trouble hiding their draconic nature when they take on their human states. They sometimes are abnormally large or they even having markings, odd eyes or even more drastic draconic features such as horns, wings and a tail.  Dragons can hide these features with glamor if they are magically inclined, or with items of clothing for example covering eyes with sunglasses. There are possibilities to have an item created to help them glamor as well...

Biped form: This is a form which appears more draconic than human, this form though taken on clearly shows what they are and can bring more problems than benefits. They have increased strength, have scales, which make them harder to injure but being in the this state brings too much attention.. They cannot use their breath weapon in this state

In full form: Dragons in modern day are not as large as their ancestors. They are smaller for various reason, but it is much easier to hide. Dragons though have all the talents of their ancestors, they have an elemental breath weapon (lighting, fire, poison etc), thick scales and extraordinarily good senses. Dragons come in a wide range of colors and body types depending on region where they come from.

Dragons are known to be beings which can live great lengths, some into 3000yrs old...

Weakness in All Dragons

Iron; Dragons are magic in nature. In the presence of Iron they will grow weak, feel sick and their ability to cast magic or use their psychic abilities lessens. Dragons can be bound in iron, they will be unable to shift and will weaken.. if in their human/biped states this can kill them if held prisoner too long.

Prideful and Solitary in nature (Introverts!) - Dragons are incredibly rare species, thought to be extinct in the modern day world and even doubted as real.

Susceptible to elements (Some dragons born into heat, stand the heat fine... Yet they are incredibly Susceptible to cold temperatures and visa versa)

Weakness in their various form; They are prone to being spotted no matter what form.. Some people will respect while others know a dragon scale can be wort a lot on the black market etc.. so being a dragon can be deadly..

Shiny: Dragons hoard, each will find something they 'need' for the hoard but each dragon is different. Some will need to hoard gold, others being more modern find other ways.. Such as bank accounts, or collecting rarities via the black market.

Territorial: Dragons can be quite aggressive when it comes to their area or belongings. They will lay claim to an area to help keep themselves protected. This claiming can be a building, a woodland area or even an entire state depending.. They also lay claim to things and persons.

Feral Mind: Dragons can go feral, attack those they consider friends if pushed to far emotionally or physically this rage can be deadly. Dragons in this rage have been known to burn down villages.

Elementals - Dragons tend to link with a certain element, opposite elements can be harmful to them though. An example would be a dragon linked to earth tend to be physically stronger and inwardly use the magic for this strength, yet they do not like to be around large areas of water due to being larger tend to not be able to swim and can drown.

Magic or Psychic use; Dragons will either develop Psychic or magical abilities as they age. Dragons cannot have both abilities, either one or the other....  AS they age they can develop their talents through study and practice, both can be dangerous and some dragons will have mishaps with their abilities and sometimes cause death...  Each ability can be physically be draining on the dragon and must be done with caution. The more mature the dragon the more strength and control they will have

Strength and size in their feral state...

Links: Dragons can form a link with x1 other person magically. This is most commonly seen with a mated pair or two very good friends.. They are able to sense each other's moods, a vague location as well as vague thoughts.

Note:  If Dragons over use their powers while in human/biped form they will need to shift into their natural states and in most cases hunt to help replenish themselves.


Hatchling: 0 - 150 yrs
Magical/Psychic Abilities: Abilities have not developed
Shifting: Can shift into human state but would look pre teen (Not allowed in adult sims) and only for short times
Strength: Weak, human like and below
Size: about 2-3ft at the shoulder.
Breath weapon: Not developed

Youngling: 150 yrs - 600 yrs
Magical/Psychic Abilities: Begin to be present; A dragon should begin to seek out how to learn more about their talents - if used they will not be practiced/trained and can back fire without assistance.
Shifting: Can shift to all three forms, yet still struggle for long periods to hold an unnatural state. THey look to be about 18 - 20yrs old at this point (1 - 2 days)
Strength: Slightly stronger than a human when in that state.
Size: about 3-5ft at the shoulder
Breath weapon: Small bursts of breath abilities.

Young Adult: 600 yrs - 1300 yrs
Magical/Psychic Abilities: If studied/practiced abilities can be used but will suffer exhaustion if over used. If dragons are magical and use magic in a low magic area, they will suffer quicker and for longer periods of time. Still possible for 'backfires' or issues with use.
Shifting: Can hold a shifted form for longer periods but still need to shift (about 2-4 days)
Size: 5ft - 7ft at the shoulder
Strength: x1.5 Stronger than a human while in their human or biped states.
Breath weapon: well developed can be used multiple times (x2 per rp session)

Adult: 1300 yrs - 2,150 yrs
Magical/Psychic Abilities: Should be well developed at this time. Can use easily but still will feel the drain and effects if over used. Minimal back firing issues/wrong casts etc
Shifting: Able to hold this form for long periods of time. (about a week)
Size: 7ft - 10ft (normally almost full size for most)
Strength: x2 Stronger than a human while in their human or biped states.
Breath weapon: well developed can be used multiple times (x3 per rp session)

Elder: 2150 yrs - 3,000 yrs  (limited)
Respect should be given (dragon prime life period)
Magical/Psychic Abilities: Well developed at this time. Can use easily but still will feel the drain and effects if over used.
Shifting: Able to hold this form for long periods of time. (about 2 week) But if any longer can have issues reverting back to their natural state - can cause death if held longer than 2 weeks.
Size: Range from 10ft - 15ft at shoulder.
Strength: x2.5 Stronger than a human while in their human or biped states.
Breath weapon: Developed can be used multiple times (x4 per rp session)

Ancient: 3,000 yrs - death (not available to players)
- Shown immediate respect by other dragons -
Magical/Psychic Abilities: Fully developed. Yet due to older age, different strains can occur and cause unconsciousness etc. if over used
Shifting: harder to shift at this age
Strength: x2 Stronger than a human while in their human or biped states.
Breath weapon: Developed can be used multiple times but age hinders use (x3 per rp session)

Added Weaknesses: Elder mind, they are forgetful at times..... the older they are the more it occurs where they drift into themselves and sometimes are hard to reach. Old Age, they are not as fast or quick as their younger counter parts (Shit hurts in the mornings..).

Note: When applying for a Dragon character please keep in mind that we are not going to allow Dragons older than 3000 years at the time of application.