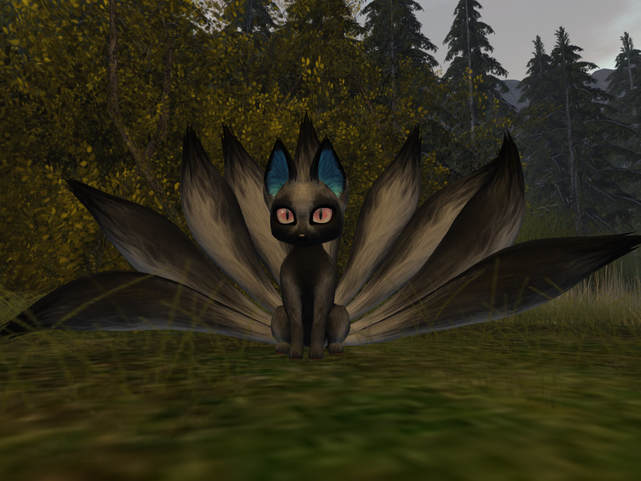 In Japanese Culture, it is said that the Kitsune is the grand-sire of the Fox Shifter.  While no one has ever been able to historically or scientifically prove this fact, the Fox Shifters of Japan and various parts of Asia all point to the Kitsune as where their origins arise as a means to make themselves seen more coveted among shifters.  This has left many of the Asian nations to honor the presence of a Fox Shifter yet despising the other types. Strangely, the same cannot be said of the Kitsune themselves.

Kitsunes are known to be mischievous beings that are neither good nor bad.  There obliviousness towards human society and emotion has had them deeply hated by many of the modernizing cultures they arose from to the point that Kitsunes are considered an endangered Magical species.  While the World Wildlife Foundation has been trying to secure safety for the race, many Asian governments still have legalized Kitsune hunting for anything with more than one fox tail.

While Kitsunes do not seem to age, they do not live beyond 1000 years.  To them, once they hit 1000, they become Ancient and leave their physical form for the spiritual form forever, shrugging off their worldly connections for a moment of transcendence.  Until this time, a Kitsune will grow a new tail every 100 years. Life and their tails are intrinsically intertwined. When a Kitsune loses a tail, they not only lose power, but life.  To remove all their tails is to remove all their life, and therefore kill a Kitsune. Once a tail is removed, they never get back that power or life to them.

Kitsunes magic is very Spiritual and mental based, as it is what they are born of.  This, along with their disposition have gotten true Kitsune into a tough spot within many of the Asian cultures.  They are often seen in the same ilk of Vampires for their powers which has caused them to be hunted to their dwindling numbers. Similar to Fae, Kitsunes have a weakness to Iron, though it can make them weaker, aside from removing their tails, the only way to kill a Kitsune is to drive an Iron rod or spike through their heart.   This works for alloys that are iron based as well, though an Alloy may not quickly kill a Kitsune (however, the blood loss still may!)

Kitsune have Three forms to best hide them within society, and for themselves, to proceed on their mischievous whims.  Unlike Fae, Kitsune can lie, and will when the opportunity strikes itself. They do not follow a Human moral compass, though.  This again is why many believe the Fox Shifter came from a Kitsune. Fox Shifter have their humanity to understand common culture and are far more timid than the Kitsune.

Weaknesses in all Kitsune:

Fox Beads: While Fox beads are shared the knowledge, it more so ‘loaning’ as one would loan a book.  Eventually the memory/knowledge must return to a Kitsune in order for the KItsune to retain it. Therefore, when Kitsune are parted from a memory/knowledge through the beads, these bits of information are permanently lost to them until the Fox Bead is returned.

Emotional Overload:  Learning emotion is a big thing for a Kitsune that they never recover from.  As emotions are learned, the stronger a learned emotion becomes for a Kitsune, the more they revert back to their true self and their powers begin to fail them.  It is as though the emotion takes them over and reverts them to a full Kitsune or demi-form.

Mischievous: By nature, kitsune do not see things as good or bad, they only see things in reference of how fun it can be. It is a pass time to see how others will react to things, without understanding that some of those things can be dangerous in nature.  Their Mischievous nature is what brought them to be so openly hunted within the Asian continent and often leads them to many moments of poor judgment for the sake of ‘fun’.

Fox Fury: Once you have earned the hatred of a Kitsune, it is nearly impossible to dissuade them. While some of them will not overtly seek to harm, their mischievous nature can take a very dark turn with those they dislike.  This not only makes trusting nearly impossible, but it makes all encounters between the KItsune and the one that they hold fury for into deadly situations.

Kitsune Tails: To cut off a Kitsune’s tail, is excruciatingly painful and weakens it, and will bring about it’s death once all of it’s tails have been cut off.
Iron: An iron spike through the heart. This may be where some of the vampire legends were pulled from, as much as from the true predators, as Kitsune were regarded as a sort of Vampire in Asia at one time. While they do not burst into flame or explode, they do become paralyzed by the iron spike, though it is starvation that actually kills them, eventually. Very slow, very painful death.  The same can be said of Iron based Alloys, although for those, it may not be the blow itself that kills a KItsune, but the blood loss from such a wound.

Fox beads: ‘yeowu guseul’ (????, literally meaning fox marble/bead) which is said to consist of knowledge. According to Korean mythology, the yeowu guseul provides knowledge(and intelligence),to people if they can steal summon and control the Kitsune. As they contain what the Kitsune has learned and even parts of their souls ( memories ) They can teach others the abilities/ spells they have learned. They do this by placing the fox bead in their mouth and transferring it it to the other person. This resembles a ” deep kiss” ( i.e. a kiss using tongue.)

Shape-shifting: Kitsune have three forms; the Fox, the demi-human and full human. Only Kitsune with 9 Tails can shift into anything in nature and take the shape of any human as an exact copy, though only if this shape is known to the Kitsune.

Enhanced Senses:  Kitsune has greater sight and smell.  They can hear in an open area within 20 meters (excluding hearing through walls) and smell within the same distance (20 meters), however scents cannot be precisely pinpointed or tracked.  They simply overwhelm the senses all at once.

Fox Fire: Kitsune can create, shape and manipulate fox-fire which usually manifests as flame (yellow), electricity(violet) and/or light(blue). These fires can only do their respective calling when brought out, and can only be used one at a time.  The number of flames is determined by the number of tails a Kitsune has grown (5 tails = 5 flames). Kistune with 8 tails or more can use the fox-fire to drain life-force or even souls.

Elemental Magic: All Kitsune can take an Elemental magic is Spirit, Psychic, or Ice based.  Players choosing a Kitsune must choose one element prior to its creation and all Magic will be in this element.

Illusionary Magic:  The Kitsune can create, shape and manipulate, illusions, causing targets to see, hear, touch, smell or taste things which do not actually exist. These movements are meant to fool perception of one’s reality and can only affect one sense at a time.  A Kitsune with 8 or 9 tails can create full scale illusions.