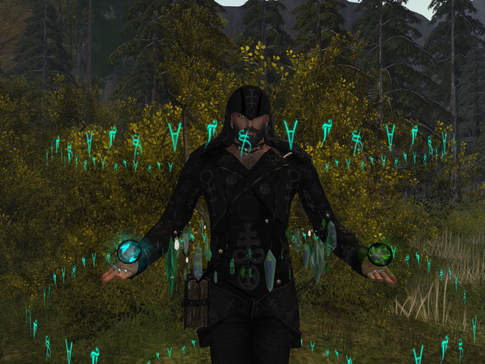 Legends of humans with abilities past what is known to be scientifically possible has existed from almost the start of the species. Those able to move things, heal or call fire to them. These humans have sometimes been raised up high or they have persecuted by those around them. Most can recall or has heard of the witch hunts of Salem, for witches were normally thought to be evil.

Just like humans witches can be neutral, evil or good or some where in between. They are human, run by emotion and human thoughts. So the stories of evil witches could be true but there is always two sides to the story.

Witches are naturally gifted with magic, sometimes it is passed down from one to the other they believe genetically but no one knows how one person is gifted while another is not. These abilities tend to start to appear as witches reach maturity (teens). Once they reach this age, their aging seems to also slow as their magic takes hold.  How magic makes its appearance can be different for each individual but normally is related to a highly emotional situation. A witch normally will become well aware they are different now and knowing magic can be shunned by some and welcomed by others tend to go into hiding. The Internet though has become an excellent resource for witches to reach out and then get connections in training their talents.

Each witch will find that their magic is attuned to an element or 'force' of sorts. Once they find what drives their magic they tend to find a focus for is this tends to bring them to the schools of Magic

Apprentice (Age 18 - 25): Can cast simple spells which do not hold much strength as they have no learned how to fully call on their powers to be able to channel it. These simple spells can cause minor sickness (Like a motion sickness) as well as head aches and drowsiness. As the caster is still young they can only cast twice in a 12 hour period. These spells take two posts.

Advanced (Age 25 - 40): Can cast more complex spells which have multi faceted parts. They are able to use more of their inner and elemental powers as they have a better knowledge how to funnel each into the spell. The advanced spells though still cause sickness, headaches and drowsiness to the caster. They also require the caster to have a 1 hour of no casting there after.If the Advanced caster wishes to cast Apprentice level spells, they can with x1 post per spell with less weakness and sickness there after.. but the more they cast, the more affects they will have.  An advanced caster can start learning other schools of magic and become apprentice level in x2 other schools of magic (via rp w/master of that school)  These spells takes one prep post and then two posts there after.

Master (Age 40 and above): Years of practice and knowledge help a master pull upon multiple strengths in their own power and that of their preferred element. They will also have gained knowledge in other schools of magic, though they will also be a master of one school they can become advanced in x2 other schools (via rp with master of other schools). A master caster can do complex, powerful spells with multiple layers of focus. They will still suffer sickness, headaches and drowsiness there after. They can only do x1 Master spell ever 2 hours and up to 5 master spells in a 12 hour period. If they push past this it can cause unconsciousness. A master caster can also cast multiple Apprentice level powers with minimum effort, they can also do Advanced level spells but are limited to 6 in a 12 hour period. If you mix Apprentice level spells with Master, you will feel greater affects and cannot cast as many spells overall. Master  spells take one prep post, then three posts there after.

A young witch will find a focus and work on mastering that one school over their life span. As they get to advanced level they can start learning more about other schools via RP In world (*NPCing is allowed, see lead for details). Once at master level, they can focus at pushing their other apprentice schools to an advanced level but cannot move beyond that.

Healing: The witches of the healing school have dedicated a vast reserve of their power to the restoration of the physical body. They tend to be good/angelic people with a love of humanity and a strong respect for life. They tend to be kind and non violent since violence runs counter to the beliefs of these witches. These witches tend to stand out amongst a crowd due to being the first ones to assist in situations, more commonly to accidentally out themselves due to their giving natures. These witches tend to give off a calming, white aura for those who can sense such things.

Elementalist: These witches are skilled at the direct control of the major elements (Fire, wind, earth, water). They range from controlling a flame no bigger then a candle in their apprentice stages, to a roaring fire that can extinguish a town at their master levels. These witches tend to live more naturally then most, you will find them close to their favored element most times and come sometimes come across like a hermit.These are your druids of the magical world, they tend to be less empathic to others as their focus is more on their natural surroundings than humanity. Their power tends to be more raw and less refined but no less powerful. Their aura will reflect their main element (Fire = orange/red, Water = blues, Earth = greens/browns, Air = light blues/whites), they tend to give off a wild uncontrolled feeling.

Alchemist: These witches are your potion makers, your enchanters. And creators of all things magical. They forgo normal spells to learn the art of creation. Depending on the level of witch they can do anything from creating potions and elixirs (love potion number 9! ;P). To security or protection wards on a home or business to scrolls and books of magic for others. Creation of magical items can take several scenes for powerful items as well as various ingredients. These witches tend to work well with others of the same craft, they tend to be creative and but sometimes a be eccentric in their thinking. Their aura tends to be browns and yellows, they give off a slight electric feeling.

Dark Magic: Those witches who practice the dark magics are not necessarily evil, yet they are the dare devils of magic and have little to no empathy towards others. They are insanely focused on their craft and tend to work in solitude.  The Witches of Dark Magic tend to bypass the safeties in magic which helps to keep magic focused and controlled. A dark magic caster can sometimes go beyond these 'rules' of magic to do things such as bring creatures or people back from the dead. They can cause harm, sickness or death in others. Some focuses of Dark magic:  Necromancy, Sanguimancy, Summoning. A Dark witches aura tends to be dark blues, to black and give off a cold or chilly sensation.

A familiar is an animal guide, it can lend its energy to a spell and help protect the witch after a spell is cast. A familiar can also help a witch rebound after a spell faster if they are present.  A Familiar must be willing (voluntarily) to bond with only one witch for their life span, it can be broken by either caster or shifter at any time but will cause a span of 'weakness' for both (About 1 week rp time). A familiar cannot be forced to assist with a spell or become bonded, this will corrupt the bond and lead to death of the witch.

Shifters: Any Animal. Shifters are non magical but none the less are powerful beings, they can help a spell by sharing their energy and then protect a caster once the spell is cast as they will suffer from 'magic sickness' there after.

Magi: Magical animals are rare in the world now a days but they still do exist. They can offer not only their physical energy but be a resource to help a witch focus their magic more to be more potent in casting. They can also protect a caster there after when magical sickness takes a hold.  Getting a Magi- animal to trust you is very very difficult, but once the bond is formed can be powerful and only a master can control such things.