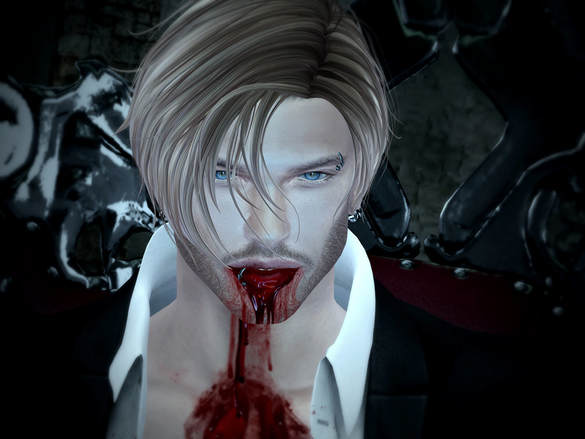 A vampire is created through several  continuous nights of a vampire draining a human of blood, it is a delicate balance for if a vampire over drains a human they can die and never have the full vampiric strain take over. It is not a easy process for either vampire or human, the human will feel pain during the process and become sickly due to the continued loss of blood. After three nights of draining, it is on the third night the victim 'dies' and the vampire strain takes over, allowing them to awake on the fourth night as a new fledging vampire.

There are times a human is invited into to become a vampire and goes through the process voluntarily but their are also cases of kidnap and torture occurring during a turning. This method varies from vampire to vampire and even from group to group.

Once a Vampire rises they tend to be confused and sometimes dangerous, they are hungry and in need of blood soon after awaking. Many groups will have an older vampire present to held guide a new vampire and help them feed the first few times. Yet, on rare occasions their are rogue vampires, without guidance that sometimes awake and cause havoc in towns.

A vampire is always created by another and so forth, their is a line of hierarchy leading from one vampire to another.  The older the vampire the more powerful they are and the more control they will have over other vampires.

A Kiss: When a vampire enters a town they must join a Kiss, otherwise face being run out of town or killed. It is disrespectful to come into a town and feed without being oathed to the Kiss lead. A Kiss will sometimes be as small as places such as Ebon Ridge or as large as a state or province depending on the power of the vampire leading it. There is a small but growing Kiss in Ebon Ridge, as well as a larger one in the closest town, Jasper, but they belong to the territory of the Master of the City of Vancouver. Ebon Ridge and Jasper  are  basically small outposts. Vampires settling down in Ebon Ridge will give a blood oath to the local Lord of the Kiss (a vampire appointed to lead the Kiss by the MotC of Vancouver).
The MotC of Vancouver is one of the elder vampires who lives a quietly in Vancouver, though quiet it does not mean they are complacent. They are well aware of the comings and goings not only in Vancouver but the various outposts like Ebon Ridge. A Kiss is also a place where vampires can gather, it supports their kind and make sure that they are succeeding in the town or location they are in.

The Ebon Ridge Kiss is new and growing, the kiss prior to the present one oddly enough disappeared without a trace. A member of the Vancouver group came down to investigate but found no answers, since then a new lead has been placed in the Kiss with a clear warning to be wary and seek answers to why the previous Kiss disappeared from existence.

Blood Oath: A blood oath is given to the leader of a Kiss and it entails drinking the blood of the lead vampire. These vampires tend to hold great power and by drinking from them creates a physic link between the two. It also gives a level of control and power over the lesser vampire entering the Kiss.

The Church of Dionysos: While it does not exist in Ebon Ridge currently, the Dionysians are noteworthy. The religion itself is about purifying the physical body to transcend to the bridge between gods and man. Dionysians feel that to be a vampire is to be closer to the gods, above the mortal realm and the closest physical representation of eternal glory.  The way of attaining this heightened sense godliness does not come in the simple embrace, its in the abandon of temptation.  However, unlike most mortal religions that seek abstinence, Dionysians embrace temptation to rid it of power of them. Indulgence breeds salvation.  It is common to see human hopefuls that are addicts of some form.  Many perceive Dionysians as a partier’s fantasy. Perhaps they start that way, but it is not their goal.

Feeding: Vampires are in all sense of the word, dead. They require blood and emotions to help them survive and they are able to do so by drinking straight from the source. They are unable to gain strength from drinking out of a dead source such as a cup or blood bag. A vampire must drink from the source (A heart beating) for them to drink. Vampires tend to prefer the blood of the shifters as it is stronger and they gain more from it, humans are an excellent second while normal animal blood can tie them over but excessively doing so will cause madness.
Vampires can drink the blood of the Magi, but each species has different affects on the vampires and not all have been explored. It is know some fae blood to cause a feeling of being high, to overly aggressive behavior and even lust... Be wary of what you bite.

As a general rule, we will not allow vampires older than 1000 years at the time of application in Ebon Ridge. The average age for vampires on our sim is between 100 and 500. Also keep in mind that older doesn't automatically mean that your character will be or has to be more powerful than anyone else.